The Runner's Web was founded in January of 1997 as a not-for-profit resource site.

The Runner's Web aims to provide a portal into the world of running - including athletics (track and field) and road running, triathlon and adventure racing.

In addition to providing access to the resources desired by participants of all age levels and abilities, the site provides timely news and features on a global scale on a 7 day per week basis with frequent, multi-times-per-day updates.

The Runner's Web is NOT associated with either of the pseudo Runner's Web sites in the UK. For more on this topic. 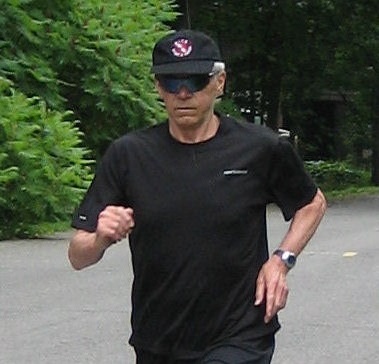 The Runner's Web is maintained by Ken Parker. Ken is the founder and former President & CEO of Sirius Consulting Group Inc. which he sold in February of 2004. (Sirius founder gives up corner office for running track)

Ken was the race director for the Avon Women's Running series in Ottawa including the Avon International Marathon (the unofficial women's world marathon championships) in 1981.

In 1988 Ken was recognized for his "contribution to Track and Field in Ottawa" by the Ottawa Indoor Games.

He was named a Gloucester "Volunteer of the Year" in the late 1980s.

Ken was named Volunteer of the Year at the ACT Sports Awards in 2002 and received the Queen's Golden Jubilee Medal for community service in 2003.

He was inducted into the Ottawa Sports Hall of Fame on October 19, 2005.

Click here for a photo of Ken in the 1979 National Capital Marathon.

The Runner's Web is designed for runners and triathletes. It contains a variety of running and triathlon (and some cycling) information, a forum (newsgroup) for Ottawa area runners and triathletes, links to other information sites, running, triathlon and cycling clubs, associations, organizations, race sites, race results, pace charts, javascript calculators (Widgets) for computing race pace, Max VO2, BMI, etc., a monthly Runner's Trivia, information on the  Ottawa Athletic Club Racing Team and links to a number of commercial "Cyber Stores" which sell running and triathlon equipment. Some links are listed on multiple pages to facilitate navigation.

As of May 2005 the Runner's Web contained more than 7,000 external links to running and triathlon related sites.

For technical information on the Runner's Web view the RW Technical Overview from the menu to the left.

If you encounter any broken links, please notify us by email. Also, if you send us comments regarding linked sites, we will forward them to the site's webmaster. Use your browser's BACK button to return to the  Runner's Web after visiting a linked site.

We will post running and triathlon related links, race and result links (or complete results if provided in a text file) free of charge. Contact the  Runner's Web by email from our FrontPage.